The new generation of shinobi has arrived and a rare question is asked, do they measure up well against shinobi of the past? BELIEVE IT!

It’s good news for those who are interested in the upcoming ninja battling game. Ahead of E3 2018, Bandai Namco has announced new information regarding Naruto to Boruto: Shinobi Striker which includes a release date, new game modes, and characters. In regards of the new information, players can now customize their own ninja avatar with gear, clothes, and a unique moveset or select a famous ninja from the popular series. Along with various others, Bandai Namco has revealed two more characters for the roster. Gaara, the Fifth Kazekage and Deidara from the Akatsuki clan which will be playable in Shinobi Striker.

Gaara‘s role in the game is a defense type ninja who uses his Grand Sand Mausoleum attack to restrict opponents for a limited period of time. As for Deidara he’s more of a range fighter which works well for the character since he uses his signature Explosive style ninjutsu to launch bombs at his opponents.

The two new modes to be introduced as a part of the Shinobi Striker release are: Flag and Barrier Battles. The Flag Battles has a basic concept as it’s simply capture the flag. The team with the most captures wins the battle. During, Barrier Battles, ninjas fight for control of three areas that hold a special significants. Each level has a unique terrain that players can use to their advantage. Each stage has a surprise attack for example like the buildings in the Hidden Rain Village. To win the battle, the team has to controls the most areas before the time limit expires.

Fans of the popular series have a chance to get a special edition of Shinobi Striker by pre-ordering the game it will unlock the 7th Hokage Naruto costume and gain early access to the master Pain character that will train the player’s avatar. By pre-ordering the Uzumaki Edition for Xbox One and PlayStation 4 it will include the base game, the Season Pass which ensures the lifespan of Shinobi Strieker. This Season Pass will extend beyond the standard offerings as it includes 9 DLC packs in total and the Great Sages of Mount Myouboku accessory. 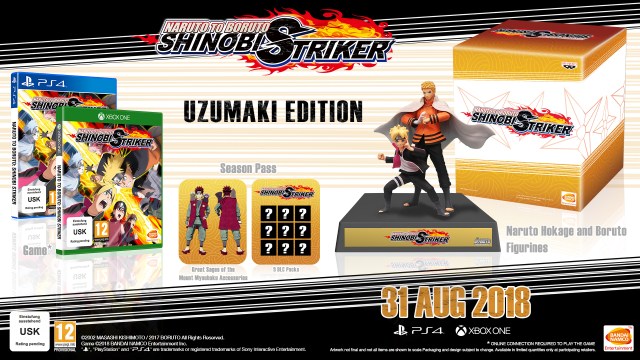 Naruto to Boruto: Shinobi Striker will be released on August 31st 2018 for PlayStation 4, Xbox One, PC.