Following weeks of positive reviews and the expectation of major box-office success worldwide, Captain America: Civil War finally arrives in theaters on Friday. And while it is technically Captain America’s movie, fans will be treated to a whole collection of their favorite Marvel superheroes, from perennials like Captain America, Iron Man, Black Widow, and Hawkeye to newcomers to the series like Black Panther, as well as the long-awaited first appearance of Spider-Man in the MCU.

But for fans in which one Marvel movie simply isn’t enough, Disney and Marvel Studios have announced that they are offering something even better for the ultimate Marvel movie (or just Captain America) fan: Five Marvel movies.

Disney has announced that The Ultimate Captain America Marathon will take place at select theaters across the country on Thursday. Fans eager to start waiting in line to make sure they get their seat don’t have to worry; tickets for the all-day event can be preordered from Fandango right now for a measly $35. 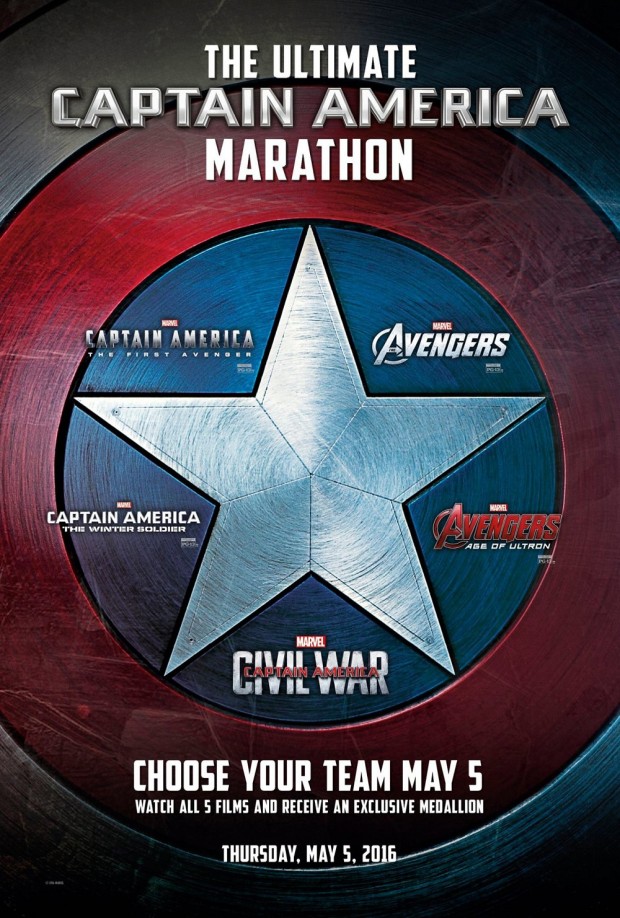 With all of Cap’s previous films, plus both Avengers movies in the line-up, the marathon will last more than 12 hours. While that doesn’t beat last year’s epic Ultimate Marvel Marathon — which included all 11 films and clocked in at a mind-numbing 29 hours — it will still require attendees to have built up a tolerance to movie theater seats, sticky floors, and the smell of popcorn. At any rate, it will certainly test the endurance of those who managed to sit through the paltry two-movie event of the Captain America Double Feature from not too long ago.

These marathons are a great way to get audiences excited about the newest Marvel movie, as it gives superfans an opportunity to relive the adventures of their favorite characters before finally having a chance to see the new installment. Even if they’ve already seen each film a dozen times or more, the experience of viewing them in succession and then to be treated to Civil War — all while at the theater — is probably tough to beat.