With Star Wars: The Force Awakens still in theaters, we just have 11 more months or so until the next Star Wars movie, the first spinoff Rogue One: A Star Wars Story. This adventure is set between Star Wars: Episode III – Revenge of the Sith and Star Wars: Episode IV – A New Hope, following a group of Rebels who embark on a mission to steal plans for the original Death Star. As of now, that is practically all we know about the story so far, but last week, a rumor surfaced that the iconic Darth Vader will be present in this adventure, but now we have another report from JoBlo that sheds new light on his role.

WARNING!! The following information in this article may contain possible spoilers. Viewing discretion is advised!

Last week’s report claimed Darth Vader will have a substantial role in Rogue One: A Star Wars Story, an appearance which will set him up to return in future spin-offs as well. This new report confirms that the iconic villain will, in fact, be part of the story, but his role is even bigger than previously thought, although no specific details were given about how he fits into the story. While it isn’t known who will actually be inside the Darth Vader costume, James Earl Jones will be reprising his role as the villain’s iconic voice, which he also recently did for the animated series Star Wars Rebels.

It is said that a ‘Darth Vader Dream Team’ is being assembled. The costume to be seen on screen is nothing like the sleek, refined, skinnier version we saw at the end of Star Wars: Episode III – Revenge of the Sith. The costume appearing in Rogue One: A Star Wars Story is being meticulously recreated to match the Darth Vader seen in 1977’s Star Wars: Episode IV – A New Hope. Inside sources claim that the costume is very close and that the filmmakers, including director Gareth Edwards, are extremely happy with the outcome. Brian Muir, the original sculptor on the first Darth Vader costume, is said to have returned to his team. 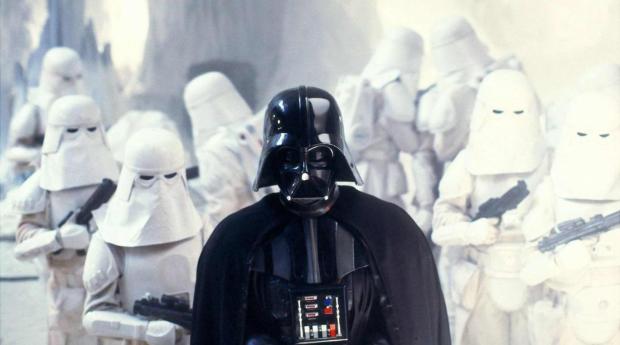 Darth Vader & his Snowtroopers in the ‘Battle of Hoth’ | Credit: Disney Studios & Lucasfilms

This report also reveals that new Stormtroopers will be present in this movie, although unlike the previous movies, these soldiers will be wearing all black, and are reportedly known as “Deathtroopers.” There is also a droid character who is said to be a “scene-stealer.” This unidentified droid works with the main group lead by Felicity Jones’ character, who was originally an Empire droid who was re-programmed to serve the Rebels. There is speculation that this two-legged droid, with either a dark gray or black color, could be the motion capture character portrayed by Alan Tudyk.

While the main cast has been confirmed, none of their characters’ identities have been officially revealed yet. Last year, Mads Mikkelsen signed a fan’s poster, revealing his character name may be Galen, but even if that’s true, we don’t know any of the other characters’ names yet. This report claims that one of the main characters’ is named “Cashen,” but it isn’t known what actor is playing this role. What do you think about these new Rogue One: A Star Wars Story details?

When rumors of Kingdom Hearts 2.9 first surfaced many gamers were intrigued by the prospect of re-playing, or playing for the first time, the prior chapters in KH’s Dark [Read more...]