Peace has been devastated as colony worlds are unexpectedly attacked. What’s more, when humanity’s greatest hero goes missing, a new Spartan is assigned the task of hunting the Master Chief and solving a mystery that threatens the whole of the galaxy.

Don’t expect Halo 5: Guardians to be the same game that Microsoft has been trying to sell over the past couple of years. That idea of Halo 5, detailed in moody trailers and previewed in a spinoff TV show, is a dramatic tale that sees iconic protagonist Master Chief take a shocking rogue turn and face off against new hero Jameson Locke. The marketing says it’s your job to “hunt the truth,” to learn what eats the soul of a faceless hero.

Halo 5: Guardians takes a step back to the Halo 2 template of giving you control of two different characters (or squads, in this case), alternating between Master Chief’s Blue Team and Spartan Locke’s Fireteam Osiris as you progress. This offers different perspectives on the narrative and – in theory – a more gripping storyline.

And it might have done, were it not for the fact that 80% of the game is from the perspective of Spartan Locke’s Fireteam Osiris, leaving Master Chief and his Blue Team largely ignored throughout. It’s a bit of a dodgy one, to market a game so heavily on finding out truths and secrets about Chief and his team, only to get control of them just three times in the game’s 15 levels.

Avoiding spoilers here, there are certain suspicions and potential plot developments that Halo 5 presents and teases without developing for far too long, instead going off on tangents that don’t feel vital to the Blue Team vs. Osiris conceit. The game gives you all the information you need to understand what’s happening, and in that regard, it’s a step forward. But by the time Halo 5 gets where you know it’s going, a destination the series has been somewhat telegraphing since 2004, the game is two-thirds over. At that point, I wondered how 343 could possibly present a story with any sense of resolution.

Halo 4, 343’s first full title after assuming control of the franchise, took some awkward, tentative steps into altering the series’s trademark brand of action. Halo 5, on the other hand, makes far more dramatic changes that end up feeling more natural.

More than ever, movement is the most important element of first-person shooters. Games like Titanfall and Destiny have made maintaining momentum just as crucial and enjoyable as firing a weapon. Halo 5 is full of fun new ways to propel yourself around the arenas, from short jetpack boosts to parkour-style maneuvers. The level design is as good as it’s ever been, with huge, sprawling maps that rely on verticality more than prior games.

Another change that may prove controversial is the addition of iron sights for every weapon, or in other words, the ability to aim by looking down the barrel of your gun. In games like Call of Duty, the method is essential to success, but Halo has long adopted a more old-school control style that sees you shoot from the hip most of the time. In Halo 5, however, the feature is largely cosmetic; you won’t get any kind of statistical bonus, gaining only a meager amount of magnification on your target. Most of the guns have neat visual flourishes when you activate the mode, and overall the feature helps make combat feel more engaging without drastically altering its flow.

Movement in MCC felt slippery, a little like skating, but that’s nowhere to be found in Halo 5. It’s smoother than previous games, but it’s also as satisfyingly tactile as the series has ever been.

The game doesn’t run at a constant 1080p resolution, unfortunately, and sometimes you’ll notice fewer pixels being rendered on your screen — often in larger environments. Perhaps more jarring is the way that enemies themselves sometimes don’t run at 60fps, giving them a jerky, glitchy appearance in an otherwise liquid-smooth world.

With that caveat in mind: Halo 5 features a solid, entertaining and engaging multiplayer mode.

Every Halo fan has their favorite game, multiplayer-wise. I think that this might be mine. The interaction between each component of your toolset feels balanced for the first time in as long as I can remember. Melee options in particular don’t feel like afterthoughts this time around, making for a Halo that feels more full-contact than it ever has. 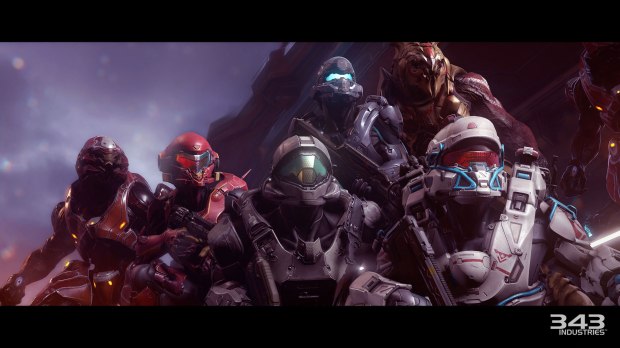 Balance is the key word here, by the way — not just in the effectiveness of your Spartan’s base abilities, but across the entire Arena experience. Your starting weapons will always be useful. I haven’t yet seen extremely advantageous sniper nests or good patrol spots in maps. The open spaces and traversal options available to everyone mean you have opportunities and risks to consider everywhere. Some players will obviously dominate, because it’s a competitive game.

Halo 5 feels like it knows its obligations. The campaign’s narrative is likely to prove controversial, though its biggest sin may be its familiarity. Otherwise, Halo 5 excels under the pressure, providing one of the most welcoming, competitive, balanced and fun games of the year — and providing my personal favorite Halo multiplayer since the series began.

Koei Tecmo and Team Ninja have announced that Dead or Alive 5 Last Round will be coming to PC via Steam alongside the console versions. Unfortunately, it doesn’t seem [Read more...]