Close your eyes for a moment and picture this. The lights cut down with the audience wondering what’s going on. “Is a return about to happen?” “Who will be coming out?” You hear a countdown show up on the screen. It begins the count from 10 and once it hits zero fireworks erupt the arena and you hear “BREAK THE WALLS DOWNNN!!!” A man with an electrifying jacket full of LED lights appears on the stage. The only person in your mind that is depicted is “Y2J” Chris Jericho.

The WWE has made us (fans or WWE Universe; whatever your preference may be) love some of the most iconic and entertaining professional wrestlers over the years. Whether it took a few years or it was instantly a connection many have gained our respect, but have become the exception to any rule the fans have with who is the “greatest of all time”. Chris Jericho is one of those wrestlers that has taken his love for professional wrestling and molded it into a true one of kind personality only he can do. He’s been a key performer in the WWE for the last 15 years ever since bursting the scene on August 9, 1999, as the Millennium reached zero. Some would say that his debut was the greatest of all time for me, it still gives me goosebumps.

He’s a man of many nicknames and catchphrases that he and The Rock could have a never-ending war of words as to who the best in the world at that. In the same regard, Chris Jericho has made them memorable enough that it’s a cultural acceptance to chant with him as his most said phrase “Welcome To Raw Is Jericho” is something of a must-know; especially on Monday Nights. Don’t get nervous junior Jericho will help you along if you don’t know it.

In an interview with FOXSPORTS, Chris Jericho was asked, “Was there one particular moment in your career where you said I feel like I’ve got it?” Chris Jericho replied,

“Right off the bat when I started the program with Shawn (Michaels) in 2008 and he took the powerbomb from Batista and landed on his knee and we didn’t know if he was hurt or wasn’t hurt and I called him a hypocrite and people started booing. Then I called them hypocrites. You’re booing me? I’m telling the truth. I’m the honest man here. That guy’s the hypocrite, he’s the liar and you are cheering for him and booing me? You’re a hypocrite. Then I realized I got it. I’ve got the ultimate thing of what a heel looks for: a kernel of truth that I can pound down people’s throats until they get so sick of it they don’t want to hear it anymore.

That’s when I knew I had it. A combination of that, working with Shawn Michaels and Nick Bockwinkel. The company had just put out an AWA documentary. I grew up in Winnipeg as an AWA fan. Watching that documentary, I just remember how freaking great Nick Bockwinkel was with his persona, his character, his suits and ties, using big words. And then that movie No Country for Old Men came out where Javier Bardem played Anton Chigurh, a serial killer that was very calm, very collected, not yelling, not screaming. Just matter of factly just the way it is. Combining those things together; this is it. This is my masterpiece. That’s kind of where it all started.”

Despite being one wrestling greatest performers he can definitely prove that his career outside the WWE is something to be proud of as his band Fozzy has become a popular rock band over the years. Jericho occasionally would leave the WWE to tour and produce new music with his band, but would always leave the WWE fanbase wondering when he’d come back. As famous as he is, the teasers of his returns have become one of Jericho’s greatest tactics to get fans to stay tuned for that famed intro countdown followed by fireworks going off.

Fozzy, in my honest opinion, is like the alter-ego of Chris Jericho where he orchestrates the tone and pace of the show oppose to 20 different writers and agents. However when he performs in the WWE, Jericho would put the same amount of energy into Fozzy to make it a success like his wrestling career. Especially when Fozzy first, started it was like “Who in the hell is Fozzy?!”, but over the years by gaining the respect of the fans the name Fozzy is quickly thrown into the mix as a good rock band. Jericho was asked, if he saw a correlation between metal fans and wrestling fans, he’d reply;

“They’re both highly intense forms of entertainment, very dependent on the audience, very aggressive and electric. When you’re performing live that reaction you get from the audience enhances the show whether I’m doing a Fozzy show or whether I’m doing a WWE show. If you have a good crowd then it makes it that much better. There’s a lot of similarities between the two but like I said it’s almost like a gang, if you like heavy metal or rock ‘n’ roll, you’re in a gang because it’s you against the world in a lot of ways. There’s more and more festivals and tours, that’s how bands are making their money but more and more people are coming out to shows to support their favorite bands.”

In the end, Chris Jericho is a professional wrestler who has a charismatic presence that will never be copied EVER! His accomplishments are too long to list, but in short he’s a six-time World champion, a first ever WWE Undisputed Champion, and the first ever to hold the WWE Intercontinental Championship a record 9 times. His life was a destiny of success as his father is, former NHL player Ted Irving, who played for the New York Rangers. As the years go by you could only wonder what “The Ayatollah of Rock ‘n’ Rolla” will come up with next, as he molds his career further to keep up with the changing times.

Whether it’s his 30 championships from the three prominent wrestling promotions in late 1990 to 2000’s (WWE, ECW, WCW), his marquee segment of listing his why he’s ‘The Man of 1,004 Holds”, or surely making it into the WWE Hall of Fame in the future, Chris Jericho will forever be the best at what he does. 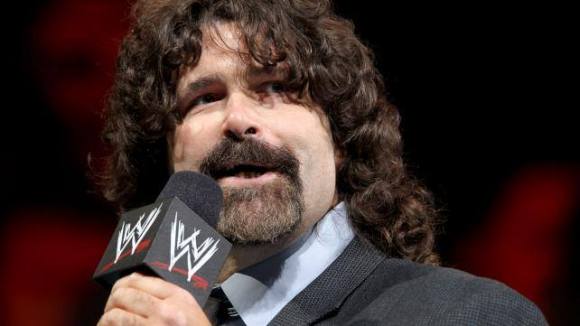 WWE: Mick Foley Explains Why He Shouldn’t Be The New GM

Mick Foley, WWE Hall of Fame wrestler, is on top of everyone’s wish list for a permanent WWE return. He continues to make a presence felt with the WWE Universe, despite [Read more...]