In a big potential update on this upcoming WrestleMania week, it seems more big Mania news is coming out, and we certainly didn’t expect this. However, the news has nothing to do with WrestleMania 31, but rather WrestleMania 32. The story revolves around major movie star and part-time WWE Superstar The Rock as well as current WWE World Heavyweight Champion Brock Lesnar.

According to The Wrestling Observer, the two may be squaring off in the WrestleMania 32 main event. The story has already started to happen. During the past week’s WWE Monday Night RAW taping, Brock Lesnar made what you would call a hype video or taped promo for his match against Roman Reigns. In that match, he spoke of how he beat The Rock when he was a rookie back in 2002.

The Observer claims that this was added specifically into Brock’s promo, as it was designed to set up a match between he and The Rock to headline next year’s WrestleMania in 2016. These claims were also made during Paul Heyman’s promos regarding Lesnar as well. While it seems a bit crazy, the concept makes a lot of sense.

As it stands, The Rock currently does have an opening in the lead up to WrestleMania 32. It was also a well known fact that The Rock and Lesnar were actually supposed to square off at last year’s WrestleMania 30 event. However, this was removed from plans because The Rock had gotten injured in his match with John Cena at WrestleMania 29. He has a movie career to worry about and due to the injury he sustained, the film Hercules was delayed in its filming due to Rock having surgery. This threw off The Rock’s schedule a lot.

That meant he was not able to work a build up to WrestleMania 30. However, he did attend the show and even appeared in the opening segment along with “Stone Cold” Steve Austin and Hulk Hogan. 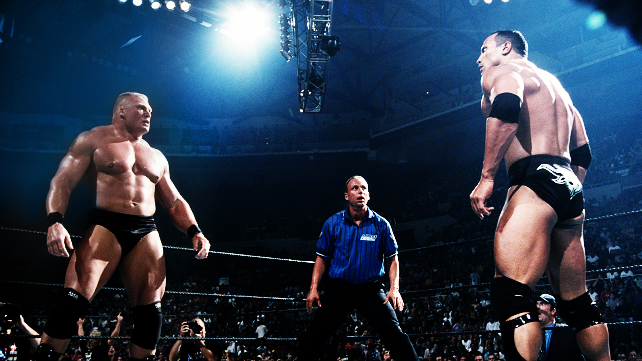 Brock Lesnar vs. The Rock – Summerslam 2002 for the WWE Undisputed Championship | via WWE

The same issue has occurred this time as The Rock’s schedule was simply too packed to be involved in WrestleMania 31’s build up. However, he could very well be involved.

One concept is that the two could get face to face on the WWE Monday Night RAW following WrestleMania. This is always a stacked show known to have one of the hottest wrestling crowds of the year regardless of the venue.

There is a problem however. Brock Lesnar has yet to re-sign with WWE.

While it has been rumored for the last few weeks that Lesnar could re-sign with WWE soon, even as soon as next week, it is not known if he will or not. There is a thought that if WWE has to change WrestleMania plans to get Lesnar to stay, they will do so. This is why you heard rumors of Lesnar retaining at WrestleMania. However, it is unknown if he will retain or lose as of now. Currently, the plan is still to have Roman Reigns beat The Beast Incarnate.

If Lesnar does re-sign, there is a huge chance we could see he and The Rock face off in a highly anticipated match at WrestleMania 32. It would certainly be a top match or THE main event of the show. Since WWE has wanted to do this match for some time, it is likely to happen. However, both parties have to be with WWE for that to occur. While The Rock could very well come back, Lesnar has to avoid going to UFC and stay with WWE. As of now, Lesnar is holding all the cards when it comes to this match happening or not.

It has been almost five years since DreamWorks first introduced us to the bumbling panda-turned-kung fu master Po Ping, voiced by Jack Black, in the animated box-office smash [Read more...]