There is something rotten in the state of Alexandria. “Start to Finish,” tonight’s midseason finale of “The Walking Dead,” puts the hardy Grimes clan and the cloistered Alexandrians at the mercy of a massive horde of the undead, who come streaming through a collapsed section of wall like a teeming, flesh-rotted, stinking river.

The attack from the Wolves weakened the church tower that stood just outside the walls. At the end of last week’s episode, it collapsed, taking down with it one whole section of the wall that protects Alexandria. The town is quickly overrun by the dead, and the living scatter to wherever they can find shelter.

Rick and Jessie, Deanna, Michonne, Gabriel, and the kids end up in Jessie’s house. Morgan and Carol end up in a townhouse together. Maggie is trapped perilously on a lookout tower. Tara, Rosita, and Eugene scamper into a garage. And Denise, Denise may be in the most precarious situation of all them: locked in the holding cell with Morgan’s prisoner, the murderous, insane Wolf. At least we found out who it was saying “help” on the walkie-talkie: Eugene.

During the first commercial break for AMC’s “Into the Badlands,” the series following “The Walking Dead,” a two-minute preview for next year’s first new episode of “The Walking Dead” debuted showing Daryl, Sasha, and Abraham stopped by a motorcycle gang.

The gang asked the trio to get out of their vehicle and told them that everything they think belongs to them now belongs to Negan. Ladies and gentleman, shit just got real for Rick and the gang! We didn’t see Negan yet, but just the mention of his name on screen confirms two things. 1. He’s definitely coming soon. 2. How to pronounce the villain’s name once and for all. (It’s Knee-gan.) A few weeks ago AMC would reveal Jeffrey Dean Morgan will be in the role of the series notorious and deadliest villain.

Oh wait, you don’t know who Negan is, well here’s a clue:

Negan, a vengeful man who reigns over the few remaining communities and survivors of the zombie apocalypse. He sets his men out to find more survivors and then takes a good share of their belongings as a tax to protect them from any zombie threats. He has a ridiculously foul mouth (every other word out of him is the f-bomb), and he has an equally wicked sense of humor to match.

Now back lets handle the business of the horde coming into Alexandria!

Glenn and Enid forged a plan from outside the gates to help their friends and family trapped inside Alexandria. Glenn seems to realize the risk, but knows he will lose Maggie either way—it’s better for him if he tries. Is it wrong, though, of Glenn to urge Enid to risk everything when the odds seem so slim?

Towards the end of the midseason finale, Glenn and Enid peer over the gate and see Maggie sprawled on the elevated platform, surrounded by walkers. How will Glenn draw the walkers away from her? 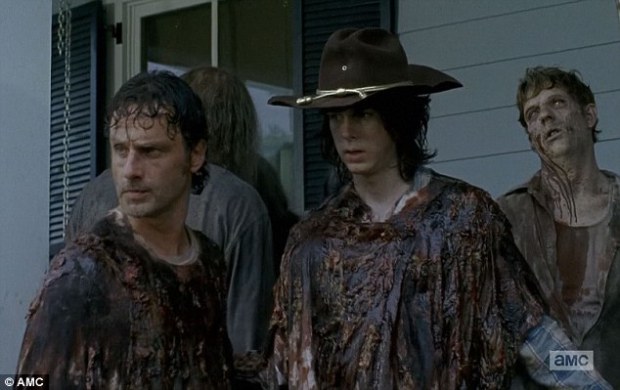 Sam, locked in his room, listens to Nick Lucas’, “Tiptoe through the Tulips,” (a cheerful tune strangely juxtaposed in a terrifying time) and most of the Alexandrians managed to shut themselves into their houses. Sam is a bit like Eugene- his hysteria is a liability.

Lucky for Eugene, Tara has his back, but does Jesse have what it takes to keep Sam calm and the group out of danger? So far, Jesse advises her boy to pretend that he’s someone strong, but will her fake it to make it tactic falter at the most inopportune time?

Slivers of hope continued as Tara argued that Alexandria will endure so long as everyone is willing to fight for it.  Is she right? Is there any way to salvage Alexandria, or is it time to move?

Things don’t work out the way Morgan planned. During his struggle with Carol, they both are knocked out and the W- man gets his knife. The villain, confronted by Tara and Rosita, held Denise at gunpoint and made his way out of the house.

If Denise dies, who is at fault- Morgan or Carol? How will this clash of The Walking Dead titans alter the dynamics…will the two be able to forgive each other? Will Morgan stay with Rick’s group? What’s more, does Morgan’s failure foreshadow Rick’s failure?

Circumstances intensified when walkers make their way into Rick’s hideout thanks to Ron, who compromised everyone’s safety when he attacked Carl. Thanks to Ron’s petty jealousy, they are forced to gut walkers and wear them, baby Judith included, so they can make a go at getting to the armory. Not everyone is up for the gruesome challenge.

The group made its way down the stairs and out into the hungry herd. Hand in hand, they moved slowly, silently to the armory when Sam begins to panic and cry out for his mom. Will Jesse quiet Sam before it’s too late? Even if she does manage to hush him, is the damage already done? Was it foolish for the group to think that Sam could pull off this plan in the first place? Will the entire group survive Rick’s plan?

If you were a bit bummed by the lack of deaths and action on Sunday night’s mid-season finale of “The Walking Dead,” the announcement of Negan’s arrival almost makes up for it. 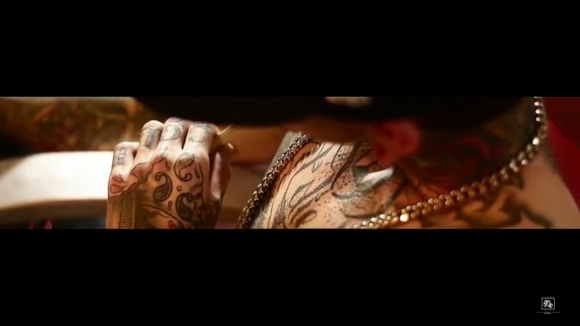 Written by J. Johnson CK Noir is a Cincinnati, Ohio native with a life that has strengthened his resolve through the struggles he’s gone through. He took to music to [Read more...]