Patrick Bateman has a great job, education, physique, good looks, and excellent grooming habits. He is also a seriously demented serial killer. Working on Wall Street during the day while planning his next killing, Patrick’s pathological defects begin to overlap between his two lives and he begins eliminating anyone who threatens his social status.

This role was initially offered to Leonardo DiCaprio and Edward Norton, but in the end it went to Christian Bale. Bale gave a wild and out range in performance as he would recite the long rants about the musical significance of popular bands of the time before he killed his victims. This provided for an outrageous yet comical aspect to the film, which hooks us.

American Psycho seems to be a true love it or hate it film. Bateman is narcissistic and pathological about his social status focusing on jealousy over things like business cards, apartments, and dining choices. The film feels a bit disjointed as his daily life and mental problems begin to overlap but begins to flow again as they become understood. Very subtle and very dark humor is dispersed throughout the film and will be lost on many audience members resulting in the love it or hate it opinions.

There were scenes where the cinematography itself was bringing comedy to the scene. Most notably when Bateman and his peers are throwing down their business cards, each of them trying to out do the last. Each time a card is placed on the table, there is a dramatic close-up shot that shows the beauteous type and color of the card, whether it be “bone” or “eggshell.” We also get close-ups of Bateman’s face, the sweat clearly visible as he sees that Paul Allen, whom he despises, clearly has a nicer card. Shots like these are game changers in comedies, especially black comedies.

Reading the novel will push the thought the movie adaptation is nothing, but child’s play. “American Psycho” is not a film with a concrete foundation. It is meant to be an exploration of Bateman’s psyche, which is in no way a reliable source of information. As the end credits begin to roll, we are only left floundering for answers. It is completely uncertain which events actually took place, if any actually took place at all. But all of this is OK. In a first-place narrative, it is comforting to be left with questions. It reminds us that narrators aren’t perfect; they aren’t omniscient. Isn’t that a relief? Even Patrick Bateman has no clue what’s going on.

Overall American Psycho is an interesting trip into the world of a serial killer that does a good job of conveying mental instability and pathological concerns. Serial killer, Bale, dark humor fans will likely enjoy this one a lot while most others will hate it.

Here’s a clip from the movie showcasing Christian Bale’s character (Patrick Bateman) morning routine. Giving you the sense that this man is so far off sanity than any other one of his “friends” that he doesn’t even like. 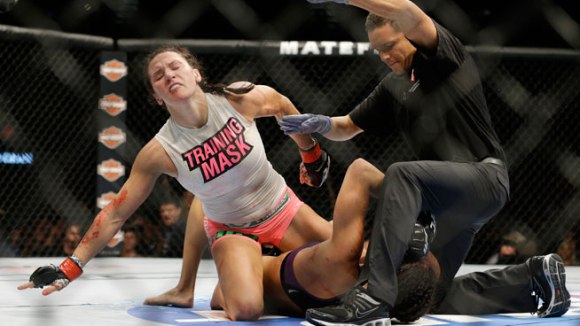 LAS VEGAS — In case the point she made in the Octagon on Saturday night wasn’t quite emphatic enough, Cat Zingano scanned the crowd until she found her boss. The [Read more...]