Almost lost in a sea of Marvel movie announcements, we suggest you keep a watchful eye on Thor: Ragnarok.

Kevin Feige has promised that Thor: Ragnarok is “a very important movie for us in Phase 3…we plan on taking Thor to another level.” We think we’re ready to believe him. Here’s why…

It’s generally been assumed that the Captain America films have taken up the mantle of “the most important” Marvel Studios entries not explicitly known as The Avengers. Iron Man 3 was fairly self-contained, and other than a flirtation with Guardians of the Galaxy in its post-credits scene, Thor: The Dark World really only seemed to have any noticeable impact on a few mediocre episodes of Agents of SHIELD. On the other hand, Captain America: The Winter Soldier introduced enough new characters to populate franchises a-plenty, and the next one, 2016’s Captain America: Civil War, may reshape the entire Marvel Cinematic Universe.

Well, name recognition is and fan service are both wonderful things, and that’s exactly what Captain America 3 and its portentious “Civil War” title is banking on. But there are now a few things to consider about Thor 3, as well, that should keep you quite interested in what’s happening on the other side of the Bifrost. In fact, this one is probably going to be every bit the lynchpin that Avengers: Age of Ultron and Captain America: Civil War are. It even takes its name, as those two films do, from a momentous comic book tale (not to mention Norse mythology).

Idris Elba recently let it slip that he’s appearing as Heimdall in Avengers: Age of Ultron, alongside Tom Hiddleston as Loki. This is almost certainly a brief appearance, but considering that we’ve seen in the trailer, Thor is quite unhappy about something or other, and we imagine he’s going to be the first to say “screw you guys, I’m going home” after they’ve whupped Ultron’s shiny ass. Heimdall and Loki could be appearing in flashback, as hallucinations, or as some kind of construct generated by Ultron. That’s not the point, though. The point is, Thor is likely out the door at the end of Avengers 2, in order to get him back home in time for Thor: Ragnarok.

Ragnarok is, of course, the mythological “twilight of the gods,” and it means the end of important players like, y’know, Thor, Loki, Odin, and Heimdall. But it was also the subject of a particularly excellent comic book story from 2004 by Michael Avon Oeming and Andrea Di Vito. While this comic book Ragnarok blended all manner of mythological elements with Thor’s Marvel Comics continuity, there’s something crucial to consider about this one, as well: it was part of a much wider Marvel storyline known as “Avengers Disassembled” which, you guessed it, broke up the team so that a new squad could take their place. But it was Thor’s departure (and death) in this storyline that really kicked all of that “disassembling” into high gear. So, yes, now it looks like we can add Avengers Disassembled to the stew of comics-influenced movie storylines in the pipe. 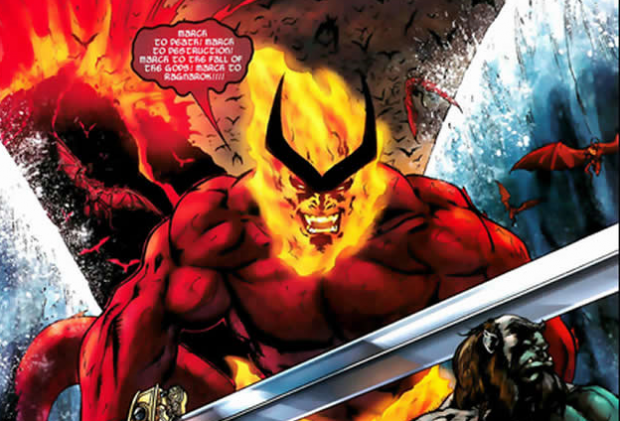 I’m willing to make a few safe predictions about Thor: Ragnarok. It’s safe to say that the fiery Surtur will be the main baddie of the piece, but he won’t be coming alone. There’s no way in any of the realms that they will leave the whole “Loki masquerading as Odin” thing unresolved, especially since at least one of them won’t survive. Hell, it’s even possible that Thor himself won’t survive this one. Thor 3 will be the fifth entry in Chris Hemsworth’s six picture deal. If they kill him off in Ragnarok, that frees him up to return for the feel good ass-kicking of the year in Avengers: Infinity War – Part II. The other possibility is simply that Thor ends up as ruler of the decimated Asgard, with the same result: it keeps him off the Avengers playground for one movie, and then he can come back for a triumphant ass-kicking to say goodbye.

And speaking of “staying off the playground,” Ragnarok will probably be the Thor entry least beholden to Midgard. It had better be. When you’re dealing with a battle so great that it eliminates gods, this might not be the place to focus on Jane Foster and her wise-cracking best pal. Since Natalie Portman’s Jane Foster was one of the first characters we met in Thor’s world, this should probably be addressed soon, and it does look like she is absent from that party scene in Avengers tower, too, so this might even be addressed in Avengers: Age of Ultron. Maybe now is finally Sif’s time to shine, along with the rest of the Warriors Three.

While the Marvel Studios movies aren’t generally known for particularly overbearing directorial vision, Thor 3 might be the film that would benefit the most from a strong director. Perhaps Peter Jackson or Guillermo del Toro could find room in their schedules for…ahem…sorry. I was daydreaming.

I’m also going to leave this one, final, teeny-tiny possibility on the table for you all. Following the events of Thor: Ragnarok (or Avengers Disassembled: Thor depending on who you ask), Michael Avon Oeming penned another Thor-related story – Stormbreaker: The Saga of Beta Ray Bill. Now, I’m not saying that Thor 4 is going to be a Beta Ray Bill movie…but goddamnit, maybe it should be. If nothing else, Beta Ray Bill would fit nicely in a future Guardians of the Galaxy movie, but now I’m just getting myself excited.

Regardless, right now there’s one thing we can count on, and that’s the fact that Thor: Ragnarok opens on July 28th, 2017