The Space Between Review

Majid Jordan is an incredibly talented duo from Canada made up of Majid Al Maskati and Jordan Ullman, known mostly for the overnight success with Drake’s “Hold On We’re Going Home.” Their debut self-titled album was one of the best R&B projects of 2016 and maybe even the past couple of years, all thanks to Jordan Ullman’s incredibly lush production and soundscapes heavily influenced by 80s synthpop. Their new album The Space Between is a big step forward for the group and has really solidified what their sound is while changing it up a bit and making their sound more accessible. The album opens with “Intro” a two-minute experimental-esque beat that commands your attention and then slowly fades away with a drum kick rising in the background, it’s the beat for track two, “Gave Your Love Away” creeping up and making a flawless transition.  Then we get “OG Heartthrob” which feels like a pseudo radio hit that’ll never be, and “Body Talk.” It’s simple yet effective song that’s equal parts bouncy and catchy. “One I Want” is certainly a sleeper hit and something that should be getting lots of exposure in strip clubs. It’s smooth and straightforward, complimented by a great hook by PARTYNEXTDOOR

The first half of the album is very lively and a bit energetic while moving along at a brisk pace, but the tonal shift in the second half is a catch twenty-two. It transitions into a darker and self-reflective aura that seems to stumble especially towards the back half. Right after “One I Want” we get “You.” It’s one of the duo’s best deep album cuts, but it gets a little too caught up in itself clocking in at almost six minutes. From there on we get the album’s first single from April “Phases” and in context of the album, doesn’t seem to fit with the tone and esthetic the album goes for. It’s by no means a bad song, just relatively out of place in an otherwise focused track list. “Asleep” and “What You Do to Me” follow each other and sound like some dark iterations of stuff you’d hear on Michael Jackson’s Off the Wall, and it works well. Personally, I feel the album drops off with the last vocal track “My Imagination.” In theory, this song should work. It’s melodic, deep, and has a feature from OVO label mate’s dvsn; but it doesn’t seem to strike anything for me. It’s just boring for the most part and something that never builds, it’s very one note. The album ends with “Outro” a long instrumental with chopped and screwed vocals from “Gave Your Love Away.” This track would have worked a little better and frankly been a lot more interesting if it served as a recap. If every song on the album had its elements chopped and screwed it would’ve been more interesting and more complete idea.

The Space Between is a signal of maturity in Majid Jordan, and it’s an album that shows tremendous growth and promise while retaining certain elements of their sound that got people to notice them in the first place. Additionally, it’s quite interesting that they’ve never had any vocal collaborations with any artists besides their label mates, and they’re the only ones on the label to do that. It’s almost like they’re keeping themselves isolated and protected by other sounds, and just channeling what they want to do. Sort of like OVO’s most widely known secret weapon. 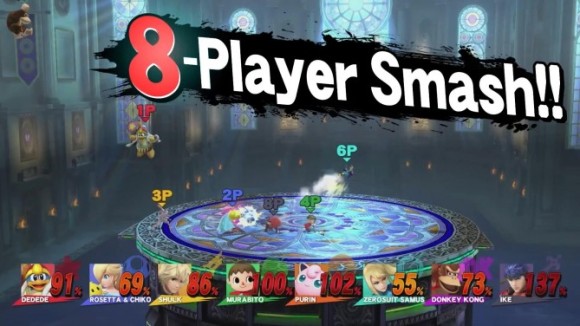 Super Smash Bros. for Wii U will allow for eight-player simultaneous play, Nintendo confirmed today. In a Nintendo Direct video (below) the company unveiled a host of [Read more...]