It’s an amazing feat to last more than a year as Tier 1 Wrestling presented, “One Year Later” from St. Finbar Catholic Church. With “One Year Later” now in the history books, Tier 1 heads the course for a new event that will quite possibly be one of the big ones, but let’s be honest the past five events had historic written all over it. On August 7th, Tier 1 Wrestling returns to Brooklyn, NY from St. Finbar Catholic Church presenting “A Savior Amongst Us” featuring the Tier 1 roster and many surprises you wouldn’t want to miss out on.

There was a lot of shocking moments during the event one came during the main event. At the end of the night, it came to a shock to the fans in attendance that after all the sneak attacks at ‘March To Victory’ & ‘METEORIC’, Gran Akuma got his wish to face Rude Boy Riley. However, the match wasn’t a singles match it became a tag team match. Akuma would gain ‘Wrestling’s Richest Prize’ Darius Carter and Riley would reach out to former UFC athlete turned top EVOLVE prospect Matt Riddle. The stage was set and with the added stipulation stating, i) if Team Akuma wins he will get a title match against Riley and if Akuma won the singles match against Riley then, Carter would receive a title shot against Akuma. And ii) if Team Riley won Riddle will get a title shot, there was a lot at stake for this everyone involved. With all that said, in the end, Akuma and Carter walked out the winners of the match after a miscue that was orchestrated by Darius Carter. With that defeat, Rude Boy Riley will face Gran Akuma in a one-on-one match for the Tier 1 Wrestling Championship at “A Savior Amongst Us”.

Another victory that solidified a match for “A Savior Amongst Us” was the 6th installment to the Six-Way Elimination Fray that occurred. There were six extremely different personalities and styles coming together to fight for the right to compete in the Final Fray. The Final Fray will award the winner a shot at the Tier 1 Wrestling Championship. It came down to Pinkie Sanchez and Randy Summers, Summers is one-half of the tag team ‘Milk Chocolate’ and has been competing without his partner, Brandon Watts due to a neck injury. Sanchez was dishing out everything in his arsenal to put Summers away, however, Summers willed his way to eliminate Sanchez to get the victory moving on to the Final Fray. With Randy Summers’ victory The Final Six-Way Elimination Fray will be ‘The Visionary’ VsK, ‘The Concrete Rose’ Sonny Kiss, Ace Romero, ‘The EmpBruh’ Black Baron, ‘Wrestling’s Richest Prize’ Darius Carter, and Randy Summers on August 7th at “A Savior Amongst Us”. Again the winner will receive a shot at the Tier 1 Wrestling Championship.

At “One Year Later” the ‘Tier 1 Wrestling Tag Team Championship Tournament’ began and Bracket A’s teams put on an amazing showcase to prove that they all will do anything to become the first ever Tier 1 Wrestling Tag Team Champions. Now Bracket B’s tag teams are being revealed with the competition mounting for the “A Savior Amongst Us” event. This past Monday, Tier 1 announced ‘The Sons of Brooklyn’ (“The Man of Steel” Mike Verna & Talon) will be involved “…to spread their love for the fans and beatdowns for their foes.” The following day, Tier 1 Wrestling announced that law and charm will have their chances in the tag team tournament, in the form of A Gentleman and an Officer (Detective Dan Barry and “The Kentucky Gentleman” Chuck Taylor). In the coming days, more teams will surely be announced as Tier 1 Wrestling gives all those who want to compete for the tag team titles a chance.

History was made in places during “One Year Later” that would make you want to know what’s coming next time it happens. Wrestlers’ Laboratory debuted as the pre-show of “One Year Later” and successfully displayed what it set out to do. The fresh new faces of professional wrestling have found a home in Wrestlers Laboratory and the news broke that ‘Volume 2′ will continue that building legacy. Wrestlers’ Laboratory has announced its next show to be titled ‘QUICK, THE ANTIDOTE!’ even with the title IMO having a play off of the ‘A Savior Amongst Us’ event meaning someone will be the savior and the cure is at Wrestlers’ Laboratory, it’s definitely going to be a fun night for all who witness it LIVE. The coming matches will be announced soon, but for now, keep your heads ready for the curse and hope. 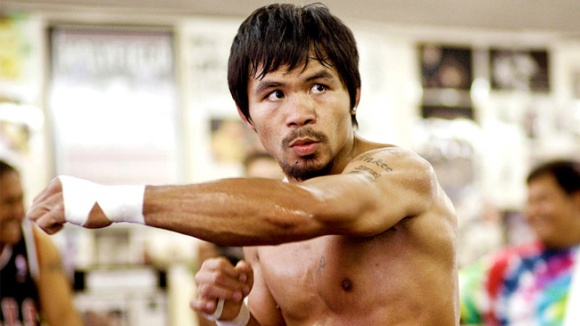 Pacquiao “Fight Of My Life”

Los Angeles (AFP) – Manny Pacquiao called his boxing showdown with Floyd Mayweather “the fight of my life” as he got down to work pounding the streets and [Read more...]