The new season of House of Cards is out and like always can guarantee something will happen. Whether it’s his quest for power, the endless ambitions of Frank Underwood will have many undertakings and adversaries who are up for the hard work to bring him down, but he seems to always come out on top.

It’s always fun seeing Kevin Spacey play this spectacular camp politician, although that’s a plus some have criticized the show for not giving out a true opponent. However in season four, it seems the flagship series has found that opponent: his wife.

Last season, Claire (Robin Wright) announced she was leaving Frank, having realized he needed her more than she needed him. As the fourth season opens, we find a house divided and the President struggling with the aftermath of his separation.

You can practically feel the realism involved in this series with Frank back on the campaign trail, in the hopes of being re-elected. Soaring gas prices have turned the public against him, and he faces tough opposition in the form of Heather Dunbar (Elizabeth Marvel), his rival for the Democratic party. It’s a shock that the KKK makes an appearance to jeopardise Frank’s position, but hey it trumps the actions for pure entertainment in a drama show then, in the real world where trumping is done among the idiocracy in the land of bravery. 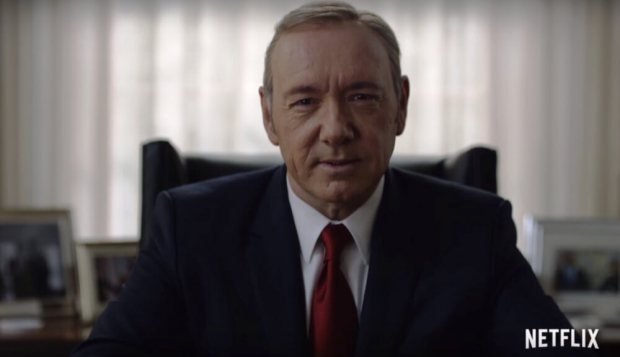 Like always Spacey delivers a mind-blowing performance, and there are far less of the fourth-wall-breaking monologues, they are replaced by another surrealist device. Even with these compelling scenes, we get some sort of scenario played out in the mind of Frank Underwood. Sequences of secrets and history back to haunt him.

Lars Mikkelsen reprises his role as the eerily accurate Putin understudy Viktor Petrov, and we see the return of one of Frank’s oldest foes, but neither can match the brewing tension between the couple at war.

Of course, the relationship between Frank and Claire has always been the show’s most fascinating source of drama, and really, this season belongs to Claire. As well as classing up the series with Ellen Burtstyn as Claire’s mother and Cicely Tyson as a venerable congresswoman.

Season four pulls the show back from the plodding and the brazenly ham-fisted mess we were presented with last year. While some viewers worried that House of Cards lost its way once Frank made it into the White House, the new episodes provide solid evidence that it has corrected its course and knows exactly which direction it’s headed in.

This is Beau Willimon’s last season as showrunner, and his breathless plotting and sharp dialogue will be sorely missed. Happily for us, he decided to go out with a bang.

‘House of Cards‘ (Season 4) is streaming on Netflix now!