Can pointlessness ruin a story? And must a television show have an ultimate goal to be compelling? It’s hard to answer these questions, especially in an age where the popularity of episodic sitcoms is on the rise and the formerly dominant serials and dramas are struggling to stay afloat. In the past decade, anime has experienced the same upheaval, and many of the most popular anime series of late have been so-called “slice of life” shows with virtually no unifying plot and, in some cases, no commitment to continuity.

One might ask whether the tendency to literally “lose the point” is bad, but whatever the case, I’ve seen plenty of good sitcom-style series, and I have to admit that it’s sometimes quite refreshing to see anime stop taking itself seriously. We get a crisis, however, when a show does present us with a central story and then spends almost no time developing it, leaving us with a half-formed idea entirely smothered by diversions and distractions. This turned out to be the problem at the core of Samurai Champloo, an entertaining but flawed pastiche of Edo-era Japan that is brought down by over-the-top antics and commitments that the series unfortunately never quite fulfills.

In a colorful version of Edo-era Japan that may or may not have existed (let’s lean towards not), a pair of highly-skilled samurai, the violent and crazed Mugen and the calculated and serene Jin, join a ditzy young girl named Fuu on a journey to find a mysterious man, butting heads and scraping up a meager survival as they wander through a countryside populated by as many graffiti artists as block painters and where a rival swordsman is quite likely to taunt one with “colorful” 20th century language.

The opening theme sets the tone for the series: Samurai Champloo is an anachronism-infused period piece that takes place in Japan’s Edo era. Blending elements of samurai and modern action with comedy ranging from slapstick to complete irreverence, Champloo is topped off with elements from old school hip-hop and other countercultures.

Anime is no stranger to hip-hop, but never has it been integrated as brilliantly as it is in Champloo. From the show’s aesthetics, to the soundtrack fueled by rap beats, Mugen’s break-dance inspired fighting style, episode themes , and subtle designs on the back of kimonos, the urban influence can be felt everywhere. Anachronisms of other varieties are also prevalent; Jin’s fashionable sunglasses, anarchist-punk styled thugs, an inconspicuous eyebrow piercing; the list goes on.

These out-of-place elements in combination with actual historic fact create for a rich setting, the likes of which is rarely seen. The series has such an exuberant amount of personality and artistic flair that it takes on a life of its own. This is the heart and soul of Champloo; if it were somehow extinguished the show would remain solid, but would also be entirely forgettable.

The premise is as basic as can be. It follows a young girl accompanied by two swordsmen she recruited on a quest to go from point A to point B, and all the zany adventures which occur in between. From the very first episode the viewer knows where the series is going with a pretty decent sense of how it’s going to end, and unfortunately,Champloo pulls no surprises.

The pacing is very similar to that of Cowboy Bebop. Most episodes stand up fine on their own while maintaining a connection with the overarching story. However, this method of storytelling seems significantly more effective in Bebop for two reasons: We’re not quite sure where Bebop is going and the final payoff is indescribably better (more on this later). Some episodes do prove fairly memorable, though the majority are unremarkable – that’s not to say they aren’t entertaining, they just don’t stick with you. 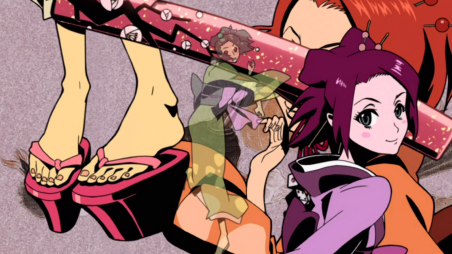 Mugen and Jin are incredibly standard character archetypes: the unrefined, short-tempered vagabond and the well-mannered, always calm samurai. This is quite easily overlooked as the molds they fill play well into the trio’s interaction with one another. Both male leads have a fair amount of depth, but it can be tricky to spot, especially with Mugen. It becomes obvious that Fuu is the glue that holds everything together, and she is also the most developed character of the three, and the only one to display significant growth throughout the journey. Her traveling companions remain largely unchanged, but this somehow works. Sadly, she is often too easily overlooked in lieu of Mugen’s badassery.

Supporting characters in Champloo are entirely forgettable: a large malformed man shunned by villagers as a monster, a blind assassin, a beautiful ninja, the dutiful yakuza boss; none of these characters stand out. The elegant, androgynous samurai appears to be the only typical Edo period character missing here – Jin almost fits the bill, almost. The show isn’t terribly hindered by an uninspired supporting cast, though it is a bit disappointing when one considers what could have been.

The show is, all around, also quite impressive in terms of technical achievements, and I was particularly pleased by the musical score. The background music, a mishmash of light beats and appropriately atmospheric keyboards, suits the show perfectly, and the opening and ending themes (which are both accompanied by beautiful art) completely hit the mark in terms of the show’s intended style. In particular, the ending theme, a spunky but soulful minor-key tune, was perfect for ending a viewing and, at times, forgetting about the show’s more irritating moments. The animation is also solid, and I appreciated the touches of Edo-era art, especially the woodblock prints in the opening sequence.

**The show’s title comes from an Okinawan stir fry dish called “chanpuru”, a mash-up of vegetables, tofu, and whatever type of meat or fish is available at the present. The title thus alludes to the series’ stated goal of mixing the worlds of 18th century Japan and 20th century hip-hop culture.

Despite a linear plot, pacing that doesn’t build anticipation or tension, and a throw away supporting cast, Samurai Champloo is still one of the best anime series of the decade thanks to its amazing anachronistic setting, top-notch production values, and personality to spare.

Fans have spent years wondering just how many films Robert Downey Jr. will wind up doing with Marvel Studios. While the actor is certainly a main attraction in the Marvel [Read more...]