MC Jin is known for his witted and off the cuff freestyle in music. Bursting on the scene on BET’s 106 and Park’s ‘Freestyle Friday’ which they began inviting local rappers to hold battles. He won all seven battles in a row, enabling him to be inducted in the Freestyle Friday Hall of Fame. Unlike other competitors, Jin spoke Cantonese words in his freestyle verses.

The latter of his success on 106 & Park would see Jin’s popularity skyrocket which included him being a judge of ‘Freestyle Fridays in 2004, inducted in the ‘Freestyle Friday Hall of Fame – Class of 2002, signing a deal to Ruff Ryder becoming the first Asian rapper to be signed to a major record label.

In 2003 although the character hasn’t made a return in the franchise’s sequels Jin was cast in the second installment of Fast Furious franchise ‘2 Fast 2 Furious as Jimmy a mechanic who works for Tej and close friend of Brian.

After putting his career on hold MC Jin would make a comeback to the states, being an established artist that has gained international notoriety especially since leaving back in 2005. His experiences have taught him a few life lessons and career changing opportunities. Since 2009, he has become a born-again Christian only to show his maturity as a person. Although hip hop & rap has a stigma of vulgarity Jin keeps his music away from such by expressing his faith.

The years of 2011 to 2012 would prove to be a blessing for Jin. He would get married to Carol in Puerto Rico circa 2011 and have his first son Chance in 2012 becoming a family man.

Since his return Jin and his associates over at The Great Company on October 2014 he has released the XIV:LIX album that has a heavy emphasis on his career and faith, with the classic flow of Jin from years ago.

2015 has presented Jin with a new way to interact with those who continue to support him new and old fans alike. From the meet and greets to appearing at events like SXSW and even appearing with Jeremy Lin in a mini MV in February, entitled ‘Chinese New Year‘ from his latest album. You would think it’s over, but in March Jin would launch ‘iknowHIM’ that involved his faith with God.

“…It is the declaration that one makes when they have arrived into an intimate relationship with God. For those who have come face to face with HIS love & grace, it is truly a life changing experience.

Whether your faith spans several decades or you are just embarking on your journey, to know HIM is to want to know HIM more.

It is not only a privilege but a duty to let the world know, iknowHIM. Do you?”

After the launch of iknowHIM, he would release an MV of another track from his album XIV:LIX ‘Complicated‘. It embodied the emotions of his career and ‘re-discovery’ of himself. It’s like a song that he would speak to the audience of why things shouldn’t and couldn’t get complicated unless you keep your head up and continue pushing towards what you believe in.

Fast forward to now Jin has taken up another venture in life to overcome, it’s comedy. Comedy is definitely a way to capture all your emotions into 10 minutes to an hour satire of getting to know someone. Although this is new stomping ground for MC Jin he’s proven in the past that nothing will hold him back unless he puts his mind to it. Debuting in April of this year Jin isn’t unfamiliar to the stage, but when you have no musical tag partner or lyrical tone to help you, that’s when your mind must come into play.

Born Jin Au-Yeung, it seems the humbling rap artist, songwriter, and actor have earned his spot on the list of the one of many multi-talented performers to etch his name in history. From his early years after catapulting himself in the music scene Jin has become a natural to the stage whether it’s acting, being an MC, and/or standup comedy. Make no mistake there’s was a time where Jin has hit the bottom and may have thought his career and life was at an end, but he never gave up and continued to push himself.

Question do remain; Will this comedian venture continue on the up? Will Jin be able to adapt and develop his craft as an all around entertainer? Does the MC have another music venture in mind? What are your thoughts about his new venture into comedy? 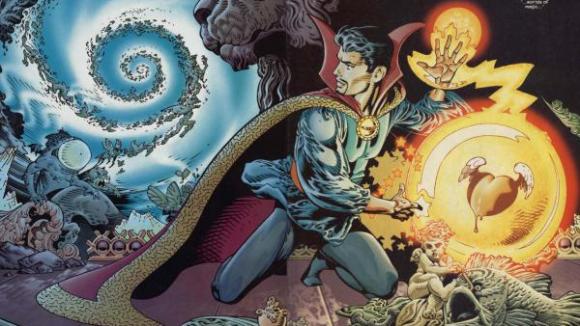 Joaquin Phoenix seemed poised to portray Doctor Strange in Marvel’s forthcoming stand-alone film, but Deadline.com reports the actor is no longer in talks for the role. [Read more...]