Todd Stashwick brings a wonderful, oily savageness to Richard Sionis, head of Gotham’s most cutthroat financial organization. Stashwick is one of the great unsung character actors of his generation; his IMDB page has more creeps in it than an entire prison cellblock.

In Gotham, he’s known as Richard Sionis, but in the comics, he’s Roman Sionis, aka Black Mask. The name never comes up in the show, but the title of the episode is “The Mask,” a clear nod to the character. Given his history in the comics — and the fact that Sionis gets punched out instead of shot dead — it’s a guarantee that he’ll return — possibly even with a new, darker appearance.

The print version of the character is a criminal mastermind who’s been around for nearly 30 years. His introduction isn’t as a brutal captain of industry, though — it’s as the head of a failed cosmetics company. Wayne Enterprises’ bailout of his company leads him to try to kill Bruce Wayne to salvage his pride. Even before a fire permanently burns the mask to his face, Sionis engages in plenty of criminal exploits, making him an ideal recurring character for a pre-supervillain Gotham.

The episode centers around the investigation by Gordon (Ben McKenzie) and Bullock (Donal Logue) of an underground combat league in an abandoned office space — think Fight Club in a cubicle farm — run by Sionis. Their investigation of a dead body smeared with blood and printer toner leads them to a blackmarket doctor (much sleazier than the veterinarian who patched up Gordon in the last episode) who points them toward Sionis.

The friction between Gordon and the rest of the force means he gets no assistance from his fellow officers. That is, until Bullock calls them out for their cowardice. What is it that finally sways the department? Is it Bullock’s impassioned plea for the police to stick together? Or is it that he calls Gordon an asshat? Probably the latter.

Cobblepot (Robin Lord Taylor) tries to make nice with Fish (Jada Pinkett Smith), but she spurns his “friendship,” stabbing him with a brooch he brings her as a present. Oswald will later present that brooch as a gift to his mother, Gertrude (Carol Kane).

And just when you think we’ve seen the weirdest mother-child relationship that Gotham has to offer, the relationship of Don Falcone (John Doman) with the spy Liza (Makenzie Leigh) notwithstanding, Fish tells Liza a story about seeing her own mother being killed. But is it real? Later, Fish is talking with an old woman — who has just sung an old blues song, “It’s Nobody’s Fault But Mine,” for her — and it seems as if that woman might actually be Fish’s mother. Maybe Cobblepot and Fish have more in common than we thought?

Alfred (Sean Pertwee) sends Bruce (David Mazouz) to school, where Bruce gets beaten up by the local bully. This leads to a little Batman-style retribution: Alfred shows him how to use a watch (Thomas Wayne’s, of course) as brass knuckles, and Bruce returns the bully’s beating. “I enjoyed hurting him,” Bruce says afterward. Alfred is certainly equipped to teach him how to fight — the question is, can he teach Bruce how to control his desire to fight? Bruce Wayne (David Mazouz) takes revenge on a schoolmate (guest star Cole Vallis) in ‘Gotham’

Next week is Nicholas D’Agosto’s debut as Harvey Dent, which will bring Gotham‘s comic-villain count up to eight: Penguin, Riddler, Poison Ivy, Catwoman, Dollmaker (whom we haven’t seen yet), Victor Zsasz, Black Mask, and now Two-Face. What do you think? Are they rolling out the villains too fast or not fast enough? Whom are you most looking forward to seeing more of? Let us know below. 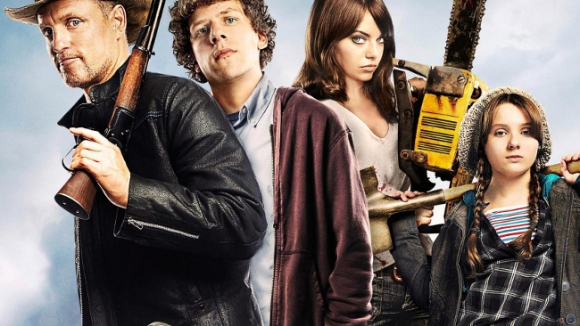 ‘Zombieland 2’ Back In Development

In the five years since Zombieland hit theaters, zombies haven’t gone out of style one bit. AMC’s The Walking Dead still has record-breaking ratings, will soon be [Read more...]