The year 2016, was a topsy-turvy year, to say the least as we seen a team that many thought would never walk away with a championship win the World Series; the Chicago Cubs, The Ryans exit from the NFL’s Buffalo Bills, and multiple moments within the world of professional wrestling. It’s been known that wrestling hasn’t been too entertaining as of late but 2016 has seen an upside for the industry. Matt Hardy, AJ Styles, Cody Rhodes, EVOLVE/WWE, & others have mastered the art of capturing the most talked about moments this year. However, we’re going to focus on the WWE side of the moments given but as have some outside mentions to this since they had some associations to the WWE.

5. The NXT Take Over

Remember when you would hear Vince McMahon manifest “It’s time to shake things up again!”? That’s exactly what has been happening for a little two years since the WWE has taken their developmental system and completely revamped it. Thanks, to the hard work of Paul “Triple H” Levesque, William Regal, and the late-great Dusty Rhodes we have some amazing wrestlers getting the spotlight they deserve as they’ve come through the NXT brand (development system). In 2016, NXT alums Charlotte, Sasha Banks, Becky Lynch, Finn Balor, Kevin Owens, Baron Corbin, Alexa Bliss, Carmella, Enzo, Big Cass, & Sami Zayn have each demonstrated that they will become established names on the main roster next to others who’ve been on the main roster for the better part of 3 years. Some of the top prospects that have shown true development are Sasha Banks, Charlotte & Kevin Owens. Sasha Banks has had a memorable year in WWE, and although we could have picked any of her stellar matches to make this list, the one that makes the cut is her first championship win on the main roster. Charlotte has basically displayed some history-making moments in the sense that she’s perfect in singles matches at PPV events. Her 4x wins at becoming WWE ‘RAW’ Women’s Champion are all successful under big match pressure. Something that hasn’t been done since the Fabulous Moolah’s reign as Women’s Champion. Charlotte’s rivalry with Sasha Banks is considered to be one of the great feuds in the new era despite the fact that the constant title changes were purely unnecessary to accomplish the goal they wanted to achieve. Kevin Owens has garnered the same accomplishments as Charlotte if not a little more given his high profiled matches against Cena, Cesaro, Jericho, Reigns, Rollins, Ambrose, and Styles. Owens brash personality sets him apart from all the others as he prides himself in being a prized fighter not backing down from any challenge. When Triple H assisted Owens to win the then, vacant WWE Universal Championship, the WWE Universe was in firm agreement that he deserved the new championship. As for the others, Baron Corbin has competed in the Andre the Giant Memorial Battle Royal and won it and has competed in a triple threat for the WWE Championship against Ziggler and Styles, Becky Lynch & Alexa Bliss have both become the WWE ‘SmackDown’ Women’s Champion, Carmella, Enzo, Cass, and Sami Zayn have all yet to make a name for themselves on the main roster but if anything has told us from their time in NXT the future is here to stay and it’s time for the new era to rise.

4. The Gift Of Jericho

The last decade has given the WWE Universe a collective group of WWE Superstars to enjoy. From Stone Cold Steve Austin to John Cena we’ve seen these names become literal household names and will continue to be for years. One WWE Superstar that’s managed to not only perform at a level since his debut in the WWE but alter his character along with changing times is Chris Jericho. Since debuting his moments are longstanding the test of time for his brash and refreshing style that wasn’t showcased in WCW but catapulted in the WWE. His most memorable moment is when he debuted interrupting The Rock which followed in a war of words between two greatest talkers in the business. Jericho would not only become one of the great talkers but also accomplish many championship records as well; becoming the 1st Undisputed Champion, the only WWE Superstar to hold the Intercontinental Champion a record-breaking nine times, a 6x World Champion, and was the final WCW Heavyweight Champion after it’s unification in 2001. The Gift of Jericho not only extends with championships and accolades but his persona on-screen as it’s always presumed to be an extension of one’s true personality. His first run with the WWE was that of a young and hungry competitor setting out to prove his worth should never go unnoticed. During his second run in 2007, Jericho was a seasoned veteran that wanted to prove he was nothing less than the “Savior” the WWE needed after his two-year absence. This run was also a signature extension of himself as he’d shed any associations of being Y2J and began to dawn a gimmick often compared to AWA legend Nick Bockwinkel. After his second run with the company, Jericho would leave the company again focusing on his own projects. Four years later in 2011, Jericho would return for his 3rd return in the WW, this time we got the Gift of a pure Rockstar, with the pyro, electric-LED light jacket, party-style attitude, and pandering to the fans. The now Superstar-Rockstar athlete had only one thing in mind as he proclaimed himself being “The best in the world at what he does” and that was to become the WWE Champion once again. After various opportunities, The Gift would fade away on occasion only to return months later. The Gift of Jericho now is compared to “a middle-aged man going through a mid-life crisis” as he wears lavished scarfs and has a snarky attitude shrugging off the fans like simpletons that are not worth his time. He’s been able to get over his LED jacket, Ambrose’s plant, his now signature scarf, and the most popular The List. Anybody from Roman Reigns to a crying baby is not immune to making the list and his list is mighty long for who’s on it. This version of Jericho is pure gold and his ways of staying relevant prove why The Gift of Jericho will forever be the best at what he does EVERRRRRRRRRRRRR! 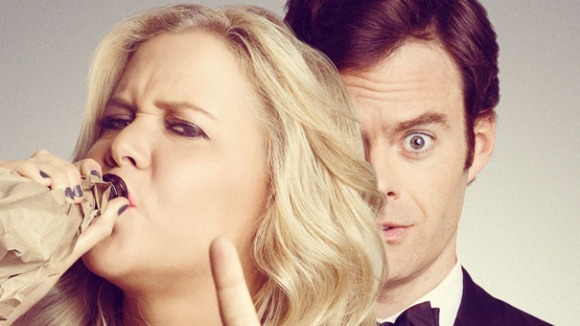 Review ‘Trainwreck’ From The Editor

Trainwreck may not be a perfect film or even director Judd Apatow’s best work, but the crass and explicitly sexual romantic comedy has positioned its star (also performing [Read more...]