One of the rare boxing blockbusters that’s also a terrific action fight is finally confirmed.

No word on the undercard yet, but hot damn, this is a good fight.

Cotto (40-4, 33 KO) — after a limp performance against Austin Trout in 2012 — went on an absolute tear, finishing three straight opponents with the aggressive, body-focused attack with which he dominated the 140- and 147-pound divisions. His last time out, he ran over Australian veteran Daniel Geale in four rounds to defend his WBC middleweight title (which he has never defended at middleweight, but that’s beside the point).

Alvarez (45-1, 32 KO) has proven himself not only a joy to watch, but uncommonly willing to face the best his division has to offer. Following his loss to Floyd Mayweather and subsequent savaging of Alfredo Angulo, “Canelo” took on the highly-skilled and highly-avoided Erislandy Lara, whom he edged by split decision. He faced James Kirkland earlier this year, scoring a hellacious knockout in the third round.

“I will give the fans the fight they want to see,” Cotto said. “As I have always said, during my whole career, I am here to fight the best names and the best fighters. This will be another chapter in my career, and I will be ready for him. Fans will enjoy a real fight, another classic battle in the Puerto Rico versus Mexico rivalry.”

That rivalry, one of the most intense in boxing, has included some huge fights, including Salvador Sanchez-Wilfredo Gomez, Julio Cesar Chavez Sr.-Hector Camacho, Felix Trinidad-Oscar De La Hoya and Cotto’s two rumbles with Antonio Margarito.

“Historically, mega fights are made because fans demand them,” Alvarez said. “In this case, the fans have spoken out, longing for this fight, and it is my pleasure to say that it is finally happening.

“All fights at this level are very important, but this fight in particular has something more. It will hold a special place in history as part of the big rivalry between Mexico and Puerto Rico, and I promise all the fans that this is going to be an event that will not disappoint.” 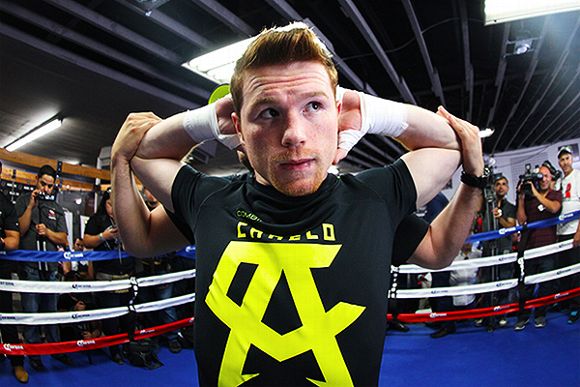 Rather than fight at the middleweight limit of 160 pounds, they will meet at a catch-weight of 155 pounds, a weight that does not favor either man, as Cotto eyes his second successful defense.

When Cotto knocked out long-reigning champion Martinez in the 10th round in June 2014 to win the world title, he likely punched his ticket to the International Boxing Hall of Fame as he became the first Puerto Rican boxer to win world titles in four weight classes (middleweight, junior middleweight, welterweight and junior welterweight).